We, the undersigned faculty members and staff of the University of the Philippines Department of Political Science join the rest of the nation in commemorating the declaration of Martial Law. It is our duty to recall what others wish to forget and distort, as well as to remain vigilant against new forms of authoritarianism that assail Philippine democracy today.

Fifty years ago, President Ferdinand E. Marcos Sr. declared martial law. His dictatorial regime brought constitutional democracy to an abrupt halt. Congress was shut down and elections were suspended. The new regime refashioned political institutions into instruments that increased Marcos Sr.’s powers. The writ of habeas corpus was suspended and the military was given broad functions to arrest and detain anyone deemed anti-government or subversive, including academics, students, and journalists. The judiciary’s independence was further compromised as justices and judges lost their security of tenure. Independent media and civil society were constrained if not totally rendered non-existent as government propaganda dominated mass media. The Marcos dictatorship stole our democracy’s most prized possessions: free speech, freedom of assembly, and popular sovereignty. Without public transparency and accountability, the Marcos family and cronies stole from the public coffers in the most egregious case of plunder this country has witnessed, leaving the economy in ruins.

What were the effects? According to Task Force Detainees of the Philippines, 6,672 people were arrested while 444 individuals were forcibly disappeared. There were 1,365 victims of extrajudicial killings or “salvagings”, and 968 killed in massacres. Overall, the Human Rights Victims’ Claims Board identified 11,103 legitimate cases of a range of human rights violations under the martial law regime.

Authoritarianism under Marcos Sr. meant more than just these numbers that describe the extent of the pain that Filipinos endured under martial law. Our colleagues and students were also victims. The violence of martial law was truly a lived experience for some. Violence also had a chilling effect on the university, silencing dissent and crushing academic freedom.

We commemorate 50 years since our freedoms were taken from us and institutions and processes were weakened so that we can collectively recall the horror of seeing our democracy die, and help younger generations understand why we abhor dictatorship and strongman rule. This is crucial in today’s polarizing political environment in which President Ferdinand Marcos Jr. and institutions of the state are distorting the truth about martial law. We protest the deliberate denial that Marcos Sr. was a dictator. It is our duty as scholars to remind the Filipino people of the unvarnished truth.

By all accepted metrics of democratic quality, Philippine democracy has been eroding at an accelerating pace since 2016. Mr Duterte had dismantled many civil rights protections and political freedoms as well as the democratic checks and balances that constrain executive power. Elections remain somewhat free and fair, but regular elections alone do not make a democracy. The independence and checks and balances functions of the legislature and the judiciary that were strengthened by the 1987 Constitution have been undermined. As we remember the atrocities of martial law, we also need to recognize that democracies weaken through much subtler methods. Without needing to impose martial law, the government can simply continue to weaken democratic constraints like his predecessor. This keeps the country on a path that condones the corruption and systemic human rights violations of both his father and his predecessor.

At the same time, new forms of violence such as disinformation and online threats create fear and quell dissent, thereby co-opting some while silencing others. However, the deliberate distortion and even erasure of truth and memory are the most pernicious of such violence for they are benign but wreak havoc on our country’s political order and social fabric. Democracy is always a work in progress yet our collective memory must be founded on truth so that we can bear setbacks along the way.

We commend the University of the Philippines and other universities, academic associations, the Commission on Human Rights, civil society groups, writers, artists, filmmakers, digital archivists, and others whose efforts help society remember and learn from our experiences in the past five decades.

We call on the Philippine government to respect the memory and victimhood of those that martial law had harmed, and to complete the construction of the Martial Law Museum on the UP Diliman campus.

As a pillar of the academic discipline of political science in the country, we remain committed to providing instruction, conducting research, and rendering public service that defends our democratic institutions, collective memory, and social justice.

We will always remember. We will never forget.

MEMBERS OF THE FACULTY AND STAFF OF THE DEPARTMENT OF POLITICAL SCIENCE, UNIVERSITY OF THE PHILIPPINES, DILIMAN, QUEZON CITY 1101

For the Filipino version of this statement, click here. 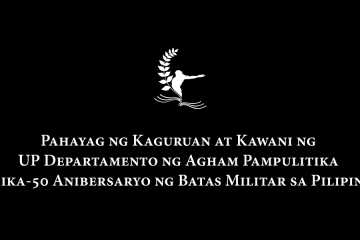