Teaching IR in the Philippines can best be understood in terms of an evolving process that has been significantly influenced by the country’s colonial experience under the United States. The development of the field is largely contextualized as a part of the discipline of Political Science. The latter in turn was situated less as an academic field and more as preparatory course for those pursuing a law degree or a career in the colonial bureaucracy. However, greater attention is now being paid to academic pursuit as an objective of higher education in the Philippines—and the consequent attention to more theoretical research and the teaching of IR as a field of study not completely beholden to the need to produce bureaucrats and technocrats for foreign policy work. There is an increasing diversity in the types of research interests pursued by IR scholars in the country. This diversity ranges from the expansion of the issues being explored to a special focus on widening the theoretical and methodological approaches that local scholars adopt. At the same time, however, the field continues to be embedded in its antecedent purpose of providing training for aspiring diplomats and foreign-policy bureaucrats. The evolution of IR in the Philippines, and the subsequent direction of the field, continue to be influenced by its historical antecedents and its emphasis on a pragmatic appreciation of what needs to be understood through the study of IR.

Purchase and read the full text of the article through this link: Teaching International Relations in the Philippines: Opening Spaces While Maintaining Traditional Approaches. 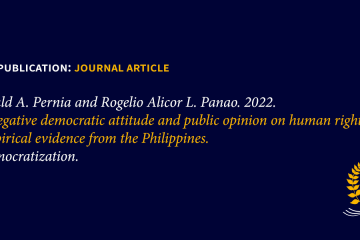